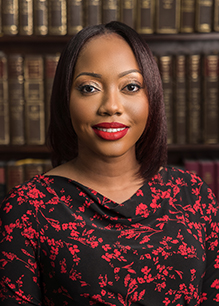 With a flair for drama even as a child, Raven Rolle grew up hearing adults predict she would either grace the stage as an actress or present her case in a crowded courtroom. She took that innate natural attention-grabbing talent and dedicated it to the latter. Inspired by advocating on behalf of those not in a position to do so for themselves, she is guided by the principles that ‘a threat to justice anywhere is a threat to justice everywhere and that injustice prevails if we sit back and do nothing’.

Ms. Rolle began her pupillage at Callenders under the guidance of Llewellyn Boyer-Cartwright, Cheryl Cartwright and Martin Lundy. She is so fascinated by law and admits it’s a tug-of-war as to which arena she will consider her top priority but her enthusiasm, concentration and desire to dig deep into the complexity of cases has won admiration from senior partners. “I’m driven by the complexity of it all,” she says. “When I’m met with a difficult case that fuels my passion. My objective then becomes getting to the bottom of the matter and solving the legal issue.”

She does have her eye set on positively impacting human rights legislation and is ready to help shift the dynamic of how laws are enforced but with a form of decency and respect that every human deserves.

Education:
In 2012 Ms. Rolle earned an Associate of Arts degree in Law and Criminal Justice from the College of The Bahamas which earned her a placement on the President’s List. She then pursued a Bachelor of Law with Upper Second Class Honours from the University of the West Indies in 2015 then attended the Eugene Dupuch Law School where she received a Legal Education Certificate in 2017, the same year she was called to The Bahamas Bar. She has served as president and public relations officer at the University of the West Indies at The College of The Bahamas Law Society. She was the recipient of numerous awards including the Bridgewater Legal Advocates Prize for first place finish at the 2017 CCJ International Moot Competition, the Colin E. Callender, Q.C. Memorial Prize for Best Performing Student in the Commercial Law Clinic, the Council’s Prize for Most Outstanding Student in the Legal Aid Clinic and the Munroe & Associate’s Prize for the Best Performance in Trial Advocacy. She has also participated in the Inter-American Court of Human Rights Moot in 2015, Price Media Law Moot in 2016 and as an advocate in the Caribbean Court of Justice Moot Championships in 2017.