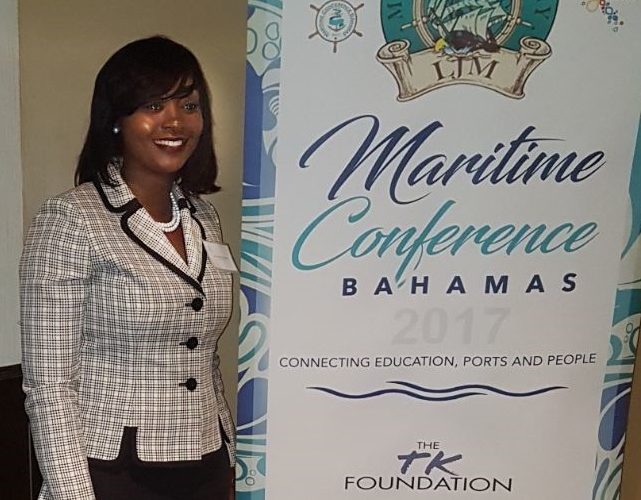 A top maritime lawyer told international experts and cadets gathered for a conference in Nassau this week that The Bahamas has the potential to be the Western Hemisphere leader serving as a maritime one-stop shop, calling the possibilities for The Bahamas “infinite.”

The projection came from Callenders law firm attorney Syneisha Bootle who was addressing the two-day LJM Maritime Academy Conference 2017 at Melia Nassau Beach. “The Bahamas is the 7 th largest ship registry in the world, the most popular flag for cruise ships and is one of the largest contributors to the International Maritime Organization,” said Ms. Bootle. And the country, particularly the island of Grand Bahama, is perfectly positioned to become a hemispheric leader rivaling thriving maritime-based economies like Malta

“The opportunities associated with a successful maritime industry are infinite. As the third pillar of our economy, following tourism and financial services, more emphasis and resources should be deployed to further develop the maritime industry in the Bahamas,” she said, noting the broad spectrum of businesses and industries that cut across and through the maritime sector from shipbuilding and repair to sophisticated financial services. “The maritime industry involves a range of different sectors — ship building, ship sale, purchase and lease, ship mortgages, insurance, finance, transshipment, ship repair, port personnel, engineering etc. If we intend to regain our place on the world stage, we will have to look beyond just ship registration and develop other sectors within our maritime industry to provide a more holistic maritime experience,” said Bootle who recently called for The Bahamas to update maritime legislation, some of which dates back more than half a century. To the cadets and experts gathered for the 2017 Academy Conference, she said little stands in the way of The Bahamas charging out ahead of competitors in the constantly growing maritime world.

“We have the infrastructure,” she said. “Due to the stellar reputation of the Bahamas as a ship registry, we are on the White List of all major ports. We have Bahamas Maritime Authority offices around the world in Hong Kong, London, New York and Greece and an agency office in Tokyo. We are an open registry, we have nautical inspectors and internationally competitive fees. We have the appeal of no income or capital gains tax. Now we have the LJM Maritime Academy providing training at a world-class level with simulator-based training and leading edge tools, turning out recruits who can move into the demanding jobs of the modern shipping and maritime transportation industries anywhere in the world. And today’s signing of an agreement between the Academy and SUNY (State University of New York) strengthens the Academy’s ties with the oldest maritime academy in the United States and advances its positioning in an age when brains are more important than brawn.” According to Bootle, who earned her Master’s in Maritime Law from the International Maritime Law Institute in Malta, The Bahamas is well on its way to becoming the regional maritime hub for the sector.

“Grand Bahama is ideally-suited with the deepest port in the region. It is home to the Grand Bahama Shipyard, the Freeport Container Port and will soon have the proposed Sea Air Business Center, a 741-acre complex that will house manufacturing, business, packaging, shipping and could become the technology hub of the hemisphere. The Freeport Container Port is already known as the transshipment hub of the Americas, centrally located and equipped for all trade demands, situated at the intersection of major North America, South America, Far East and European Trade routes. It is currently the deepest container terminal in the region and serves as a major container transshipment hub for the eastern seaboard of the US and the principal east/west line-haul routes through the region. It offers comprehensive support services and leading-edge technology to the world’s largest container vessels.” Bootle’s advice – explore public-private partnerships to further develop the established infrastructure, educational facilities and make the Sea Air Business Center a reality, review and update legislation, including the enactment of treaties ratified, further establish the yacht registry and in the near future create a super yacht registry to attract the newest class of popular built vessels.

“The Bahamas is ripe for investment and there are numerous opportunities to conduct business here. With us offering a more holistic maritime experience, this will open the doors for the growth of other sectors such as tourism, banking, real estate (ship owners/yacht owners would be interested in vacation homes in the land of the sun sand and sea) among other industries.” said Bootle, who is carrying on the long tradition with maritime law in the country’s oldest law firm where senior partner Lester J. Mortimer, Jr., QC continues to practice the highly specialized discipline.