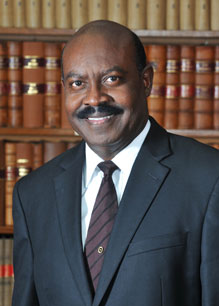 Stephen A. Turnquest is one of that rare breed of attorneys who is as committed to combing through however many pages and cases and documents it takes to find the seed of a detail he needs as he is comfortable arguing a case at the highest level. Detail-oriented and thorough, Turnquest is adept at preparing, filing, arguing and, when necessary, defending highly complex and multi-layered cases.

Ask him to describe himself in a single word and he says meticulous. That eye for detail and commitment to leading his own research team rather than delegating that responsibility has served clients well since 1987 when Turnquest was called to the Bahamas Bar.

Dedication to thorough research and detail have led to many successes, but one of the most interesting involved foreign litigants in a cross border dispute over an insolvency matter.

A U.S. citizen who, with his wife, co-owned a Bahamian property of some considerable worth became a judgment debtor of Turnquest’s client. The debtor subsequently declared bankruptcy in the U.S. Although Turnquest obtained an order for the sale of the property to settle his client’s debt, a U.S. judge declared the Bahamian court order null and void. Turnquest successfully argued, inter alia, that the U.S. Bankruptcy Court had exceeded its power and authority, as a U.S court has no jurisdiction to declare an order of a Bahamian court null and void. It was a clear case of a clash between two legal systems over Bahamian property. The case went all the way to the Privy Council in London.

Education:
Born in Nassau in 1958, Stephen Anthony Turnquest received his LLB from the University of The West Indies in June 1985 and a Certificate of Legal Education from the Norman Manley Law School in Jamaica in 1987. He was called to the Bahamas Bar in 1987. Venues for continuing education have included Harvard University in Cambridge, Massachusetts.