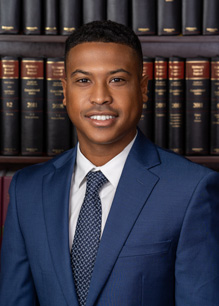 Ian Cargill Jr. began his pupilage at Callenders in January 2021 when presented with an opportunity to learn from ‘one of the best litigators in the country’ in the person of Fred Smith, QC.

“I appreciate the type of work that is done here and it’s a good thing, when in a small country like The Bahamas, you have someone hold the government accountable, particularly in cases where there is a breach of the constitutional rights of any person,” Cargill says. While human rights and constitutional law are areas he’s fond of, he’s chosen banking as the area he’s most excited about.

After a stint at the Central Bank of The Bahamas where he was introduced to the principles of banking, Cargill embarked on his undergrad studies in Economics because in his words, ‘money controls everything’. In an effort to understand how to analyze money and people’s behaviour towards money, he simultaneously minored in philosophy of law. With his interest sufficiently piqued, the young man who walked in his father’s footsteps to become an attorney, set his sights on attending law school and the lifelong pursuit of determining how the law confines the use of money.