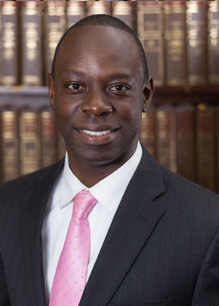 Garth Philippe, a member of the New York Bar, the Bahamas Bar and former advisor to the United Nations, is a multi-lingual attorney fluent in English, French, Spanish and Dutch specializing in financial services.

“We are entering a new and vibrant world of financial services and The Bahamas will once again emerge as a pre-eminent jurisdiction,” says Philippe who on any given day may find himself speaking Spanish with a client from South America or speaking French with a client from Monaco. “The internet has changed the world. There is more information available and people are traveling more, adding to the information they take in. At the same time, there are challenges in living in a global environment with strict reporting policy and common reporting standards. That has resulted in new areas of law that we never had before. It’s exciting.”

What is emerging is a Bahamas once again at the forefront of financial services, compliant with the most stringent standards, equipped with a well-trained cadre of professionals, a strong and stable democracy and the proximity to major markets.

“I am very motivated by this new era of financial services,” says Phillipe, who serves as a director of an offshore bank and trust company.

When Philippe joined Callenders as an Associate in 2014, he brought with him extensive experience in commercial transactions, contributing to Litigation and Insolvency matters. Mr. Philippe joined the United Nations in New York City in 2010 as an intern and was appointed an advisor. He later served as legal advisor to a private lending firm in the Tri-State area in relation to commercial contracts and assisted with negotiating contracts with Chinese companies located in Beijing, Hong Kong and Guangzhou. Mr. Philippe speaks fluent French and Spanish, and is conversant in Mandarin and Dutch.

Mr. Philippe studied Spanish language and culture at La Universidad de Salamanca, Spain in 2006. Later he studied law at the University of Manchester, England where he received his (LLB) in both English Law and French Law in 2010. He also attended L’Université de Bougogne, France where he furthered his studies in French Law and civil law traditions and achieved the graduate level Diplòme de Relations Internationales in Public International Law in 2010. He earned a Certificate of Legal Education from the Eugene Dupuch Law School, The Bahamas in 2015. In 2012, he was admitted to the New York Bar and in 2015, the Bahamas Bar.