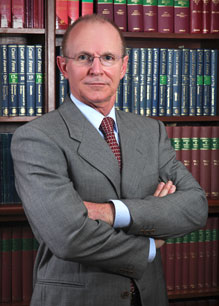 Of all the 1,000 or so practicing attorneys in The Bahamas, Carey G. Leonard may be the least likely ever to have headed for a career in the legal profession or achieved the corporate and community leadership heights he has. His story reads like a modern day Robinson Crusoe fantasy.

Mr. Leonard grew up on an island of 16 people. The only teacher he knew until the age of 10 was his mother. Luxuries such as electricity and fresh water were limited and never wasted. His parents taught him how to fish, dive conch and crawfish, catch and cook dinner, handle garbage disposal for the island and maintain its single road. The idea of a suit and tie, law books and a courtroom were as foreign as a telephone.

Yet, it was that very life of meeting immediate needs with constant readiness that prepared Mr. Leonard for the career he chose. “You had to be flexible, agile and adapt. And law is the same in that it requires thorough preparation and quick thinking. No two cases are the same. No two days are the same. It is a lot like the Bible. No matter how many times you read it, there is always something else to discover. Here you come in every day and there is something new to learn. Every day is an adventure.” That sense of wonder that keeps him on his toes has been his constant companion for more than 40 years.

Mr. Leonard’s early career dovetailed with an interest in aviation ignited by stories from an uncle who had flown over 50 different aircraft during World War II. “Aviation fascinated me and still does,” he says. Mr. Leonard’s handling of aviation-related matters established Callenders’ reputation in the field early on and today with the addition of partner Llewellyn Boyer-Cartwright as aviation specialist, Callenders retains its singular position of trust among aircraft owners, airlines and the aviation industry.

Mr. Leonard is equally versed in Corporate and Insolvency Law, Commercial Law, and Trust & International Law. He has handled contracts and government relations for several hotels and resort developments. As the former General Counsel of The Grand Bahama Port Authority Group of Companies, he helped cement a number of multi-million dollar transactions, including the sale of a pharmaceutical factory, a large resort and a land development company. He also has extensive knowledge and experience in dealing with all aspects of the Hawksbill Creek Agreement which governs Freeport’s activities and businesses.

Mr. Leonard has served on the Bahamas Government Airport Advisory Board, the Blue Ribbon Commission on National Health Insurance, the Steering Committee of the National Development Plan and has, most recently, been appointed to the Air Transport Advisory Board. He is a former president of The Bahamas Chamber of Commerce, where he lifted the ban on Sunday Shopping, and a former lecturer for the Bahamas Bar Association on Conveyancing.

Born in 1950, Mr. Leonard was educated at Trinity College School in Ontario, Canada.