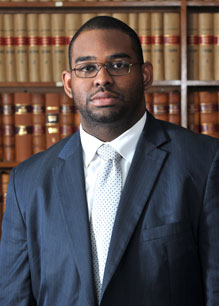 “Callenders is proud to name Martin Lundy a junior partner,” said Chad Roberts, managing partner, Nassau. “With the firm’s history dating back more than one hundred years, Callenders’ partnerships have symbolized the best in the profession, excellence in work ethic and sterling integrity, all characteristics which Mr. Lundy has demonstrated consistently since joining the firm in 2012.”

Lundy came up through the ranks, as a pupil under the tutelage of the late Colin Callender, QC. He was promoted to Associate a year later.

Starting out in commercial law, Lundy’s practice quickly grew to include Bahamas Investment Authorityapplications , exchange control matters, dispute resolutions and multijurisdictional trust disputes, including one complex case with interlocutory motions that touched assets and victims in dozens of countries.

Lundy, however, set himself apart when he began to handle human rights and environmental matters providing a voice to the voiceless who sought political asylum, or refugee status, but were locked up in detention centres for years despite international bodies decrying such acts.

“Martin Lundy is a litigant’s litigant. An integral part of the Callenders hard-working human rights team, and a growing figure in international human rights issues,” said Fred Smith, QC, Callenders managing partner. “Martin’s skills and dedication are being recognised beyond our national border.”

In recent years, Lundy has participated in global human rights discussions contributing to panels in Jamaica, Costa Rice and The Bahamas.

Lundy graduated from the University of Sheffield in 2009 with his Bachelor of Law (LLB). Upon graduation he commenced and completed the Bar Vocational Course at BPP and was called to the Bar of England and Wales in July 2010 as a member of the Honorable Society of Lincoln’s Inn. Later that year he was called to The Bahamas Bar.